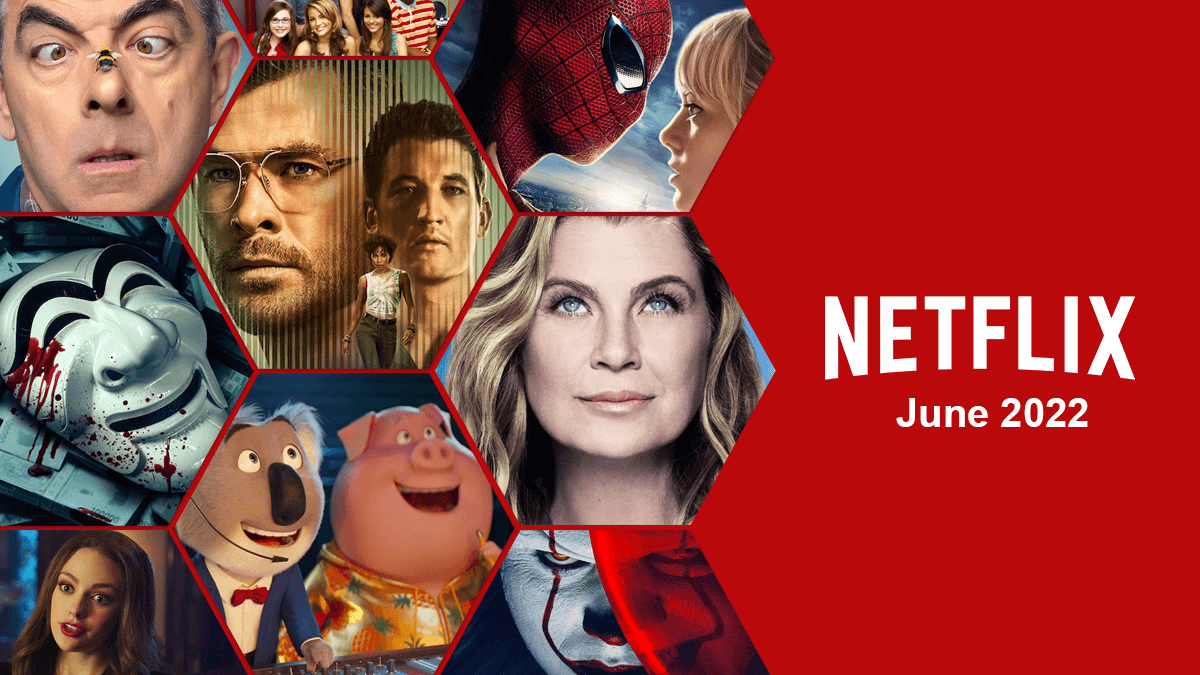 Netflix remains one of the best platforms around, with a massive collection of original shows, despite facing stiff competition from the growing number of streaming services currently available. This trend is looking set to continue well into 2022 with a variety of shows that will stand toe-to-toe with anything the brand has presented in the past few years. There have been many high-profile Netflix new releases so far this year, including Ozark's final season and The Adam Project's third season. However, June might be the best month yet for Netflix new releases. Netflix is releasing so many new movies and shows in June. Chris Hemsworth, Jennifer Lopez, Adam Sandler, and Melissa McCarthy are among the stars who will be appearing on Netflix in a number of must-see movies this month.

The Danish television drama series Bogen focuses on political issues. Tobias Lindholm and Jeppe Gjervig Gram are the series' writers and developers, along with Adam Price. A drilling company suddenly discovers oil in Greenland when Nyborg is newly appointed minister for foreign affairs. A series of eight episodes that follow the unfolding of an international struggle for power in the Arctic. Although Nyborg is otherwise such an experienced politician, he must continually accept that Denmark has a 'big brother' relationship with Greenland, but when it comes to the global superpowers, it is Denmark that is a minor player - and a somewhat unruly one at that...

Interceptor is an upcoming American action drama film directed by Matthew Reilly from a screenplay that he co-wrote with Stuart Beattie.The tough and reality-bruised Captain JJ Collins (Elsa Pataky) finds herself in charge of a lone nuclear missile interceptor base in the middle of the Pacific Ocean after she is wrongfully drummed out of her dream job at the Pentagon. When a simultaneous coordinated attack then threatens the base itself, Collins comes face-to-face with the charismatic yet crooked Alexander Kessel (Luke Bracey), a former US military intelligence officer intent on carrying out an unthinkable plan. With only minutes on the clock, Collins must utilize her years of tactical training and military expertise to determine who she can trust and stop Kessel and his covert mercenaries from completing their twisted and terrible mission.

Chris Addison directs the 2019 comedy The Hustle. A pro basketball scout, Stanley Beren, who recently lost his job, is surprised to find amateur baller, Bo Cruz, playing in a park outside Madrid. This is the first time in a very long time that he has been excited in a long time. With a new sense of purpose, Stanley makes it his mission to prepare Bo for the NBA, believing it is possible for both of them to succeed.

Steven Knight is the creator of the British crime drama Peaky Blinders. Following the exploits of the Peaky Blinders crime gang in Birmingham, England in the immediate aftermath of the First World War. An urban youth gang of the same name that operated in the city from the 1880s to the 1910s inspired the fictional gang.

Amanda Micheli is the director of the upcoming Netflix original documentary Jennifer Lopez: Halftime. With a major focus on Jennifer Lopez's performance at the Super Bowl LIV Halftime Show, the story follows her career. During the opening night of the 2022 Tribeca Film Festival, the film will be screened.

This upcoming American workplace comedy series will be created by and starred by Ben Falcone. Clark is suddenly able to glow after being struck by lightning in an unusual angelic cloud. Several of his coworkers, including his girlfriend Amily, believe it may be related to God. Clark is reassured by God's messenger that he must prevent the Apocalypse when an angel tells him he is to be God's messenger.

A Japanese television cooking show produced by Fuji Television is Iron Chef. A modern twist on the groundbreaking competition that started it all, the legendary Iron Chef series is reborn. There's no doubt it's one of the toughest challenges that any chef will face. High-octane sports and world-class cuisine go hand in hand here. New Iron Chefs will welcome five brave Challenger Chefs to the reimagined Kitchen Stadium, where they will be tested to their limits of endurance and creativity as they prepare culinary masterpieces. Challengers who have achieved the most success will return to battle to win the title of "Iron Legend."

The thriller movie is directed and written by Sebastián Schindel, and it is based on the novel by Guillermo Martinez titled "The Slow Death of Luciana B." A young couple with children is facing a crisis, and they have exhausted all possible possibilities for dealing with the problem. Finally, they decide to use a program that adds or subtracts points based on how well they compare with each other. Initially, everything seems to go smoothly, but as their obsession with accumulating points and becoming independent grows, their lives will spiral out of control.

Actor Toma Ikuta is from Japan. Ikuta has appeared in films such as Hanazakari no Kimitachi e, Honey & Clover, Sensei!, Mao, Ouroboros. His film credits include Hanamizuki, Ningen Shikkaku, and Brain Man. A new Japanese documentary about the evolution of new kabuki and the actor's friendship with kabuki star Matsuya Onoe.

An upcoming American science fiction thriller film directed by Joseph Kosinski and adapted from George Saunder's dystopian short story "Escape from Spiderhead", Spiderhead is written by Rhett Reese and Paul Wernick. In a near-future society, two convicts struggle with their pasts while imprisoned in a prison overseen by Steve Abnesti, who can reduce the punishment for those who volunteer for experiments using drugs that alter emotion. Jeff cares for Rachel, a prisoner, and tries to save her from the experiments at the prison.

There is a Japanese manga series called Spriggan written by Hiroshi Takashige and illustrated by Ryōji Minagawa. Thousands of years ago, an ancient civilization known for their advanced technology once ruled Earth, but was ultimately destroyed by their misuse. As a result, they left indestructible message plates in ancient Hebrew that inform future generations that if they cannot find a good use for their creations, they should be destroyed. These "mysterious artifacts" have been sought by paramilitaries, national armies, and private armed forces who plan to use them for their own purposes as well as against their enemies. It is the ARCAM Corporation and its military command the ARCAM Private Army that can prevent these forces from damaging themselves through their elite secret agents called Spriggans (or Strikers).

Defending civil rights and wrongful death lawsuits is a specialty of American lawyer Ben Crump. Crump was born on October 10, 1969. His previous cases include those involving Trayvon Martin, Michael Brown, George Floyd, the Flint water crisis victims, and the plaintiffs in the Johnson & Johnson baby powder lawsuit claiming the company's product caused ovarian cancer diagnoses. The law firm Ben Crump Law was founded in Tallahassee, Florida, by Crump. Crump became the attorney for Ahmaud Arbery, Breonna Taylor, George Floyd, and Jacob Blake's families in 2020. He became the attorney for Winston Boogie Smith's passenger and for Daunte Wright's family in 2021. Continuing cases concerning their deaths or injuries led to protests in America and abroad against police brutality.

The new rom-com, adapted from the Jenna Evans Welch novel, tells the story of an American high school graduate who reluctantly travels to Rome to fulfill her mother's last wish, but will she find love? Liana is spending the summer in Tuscany, but she isn't in the mood for Italy's famous sunshine and fairy-tale landscape. It was her dying wish to meet her father, so being there is her only reason for being there. She wishes nothing more than to return home. Afterward, her mother gives her a journal that she kept while living in Italy. Now Lina is discovering a secret world of romance, art, and hidden bakeries. Together with the ever-so-charming Ren, she follows in her mother's footsteps to uncover a secret that has been buried for a significantly long time. The secret she discovers will change everything she knows about her mother, her father, and even herself.

The Umbrella Academy is a streaming television series inspired by Gerard Way's comic book series of the same name, illustrated by Gabriel Bá. By June 22, 2022, the new season will reveal the mystery of the Sparrow Academy, Hotel Oblivion, and how the Umbrella Academy will cope with their new reality. New cast members include Cazzie David as Jayme, Jake Epstein as Alphonso, Justin Cornwell as Marcus, Britne Oldford as Fei, and Genesis Rodriguez as Sloane.

The Netflix original series Man Vs Bee premieres on June 24. Comedian and actor Rowan Atkinson portrays a new role in this riotous comedy. While housesitting a luxurious mansion, a man gets attacked by a bee. In the process, what damage will be irreparable? Who will win?

The television series Money Heist: Korea - Joint Economic Area is based on the Spanish heist crime drama of the same name. This TV series is a remake of the Spanish TV drama and follows the storyline and characters in the original series. Yoo Ji-tae, a criminal mastermind and strategist, plans a heist in the Korean Peninsula. Strategists and desperate people who have different abilities and characteristics are involved in the operation.

Bastard!! Anime International Company produced an OVA series in 1992 directed by Katsuhito Akiyama. There will be a brand new anime series produced by Liden Films based on the manga that has sold over 30 million copies worldwide. It follows the adventures of Dark Schneider, a 400-year-old wizard who was sealed away for fifteen years following his defeat by Lars Ul Metallicana.